For it is in giving that we receive; It is in pardoning that we are pardoned; And it is in dying that we are born to eternal life.
You are here: Home / Church / Lonnie Ellis Presents with Cardinal Turkson at the Vatican 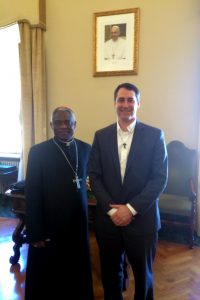 Lonnie Ellis OFS, associate director of the Catholic Climate Covenant, had the privilege of co-leading a presentation at the Vatican on climate change on April 11th with
Cardinal Peter Turkson, President of the Pontifical Council for
Justice and Peace and leading figure in the development of Laudato Si’. 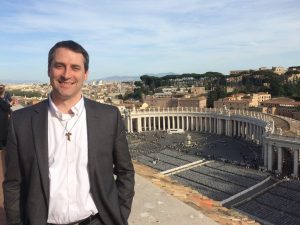 Here’s a brief reflection from Lonnie on the event, which was organized by the U.S. State Department and attended by diplomats from a wide range of countries:

“Presenting alongside Cardinal Turkson was one of the greatest honors of my life. He is a hero to many of us, and is incredibly kind and humble as well. His voice is sought after for a great number of events (I think he spoke at 3 other major conferences on social justice that week) and yet he was so present to us in the room. Some of his handlers suggested that he leave after his presentation, but he replied, while turning to smile at me, ‘No, no. I want to hear what Lonnie has to say.’ I gave it my best, presenting with energy on the efforts to implement Laudato Si’ in the U.S. Our confusing divisions and politics on climate change are well-known around the world and to the diplomats in the room, so it was a pleasure to tell the story of robust leadership and innovative action from the U.S. Church as we
call for honest dialogue in our country and a moral response to the suffering caused by climate change.”.

Please take a look at these books if you would like to deepen your understanding of the Franciscan life.